Did you know you can move mountains and buildings in a matter of seconds with your camera?

You can if your camera has any “zoom” capability, and just about every camera does.

Telephoto vs Zoom: Zooming in tight to make the distant object large is called “Telephoto” and zooming out wide to capture a wide scene is called “Wide Angle”.

Let’s say you wanted to take a picture of your friend on vacation, standing by a railing with the city in the background.  If you stand close to your friend and set your camera on Wide Angle then the background city will be pushed back and become amazingly insignificant.  However, if you stepped away from your friend a good distance and then set your camera to Telephoto by “zooming in” then you’ll be amazed at how close and large that same city appears.  Your friend can be the same size in each picture but the backgrounds will be quite different. 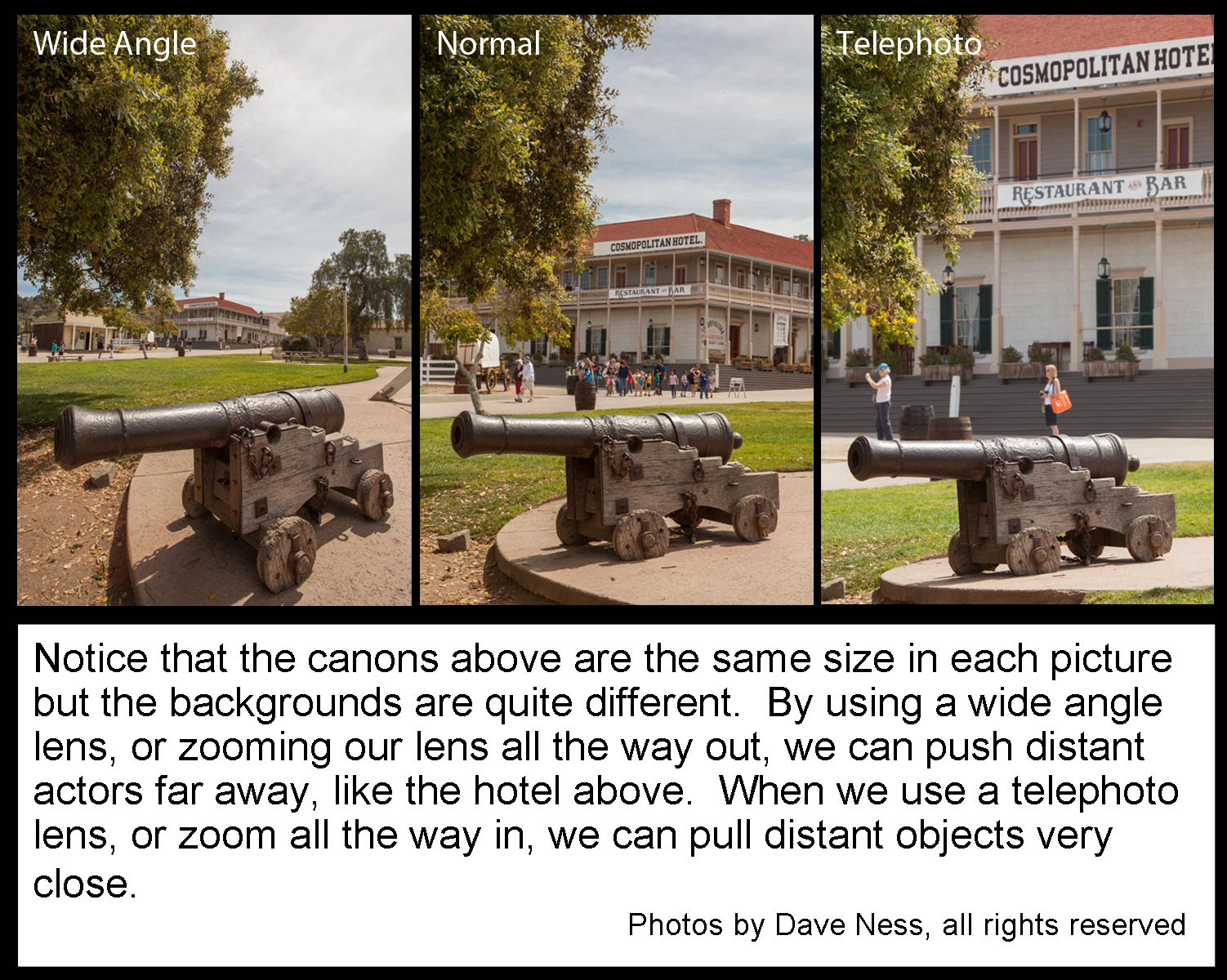 The picture of the canon itself could be boring. By bringing the historic hotel closer the scene gets more interesting.

This technique is used in commercial and art photography to bring distant objects close and in view or to push away less interesting nearby objects.  It’s all about what you want your viewers to see in the photo you take.  Is the story “Look at Leslie in Downtown San Diego”?  Or, do you want the viewer to only be focused on Leslie in the photo?  You can control what the viewer sees by making distant objects appear larger and closer or farther and smaller than they really are. 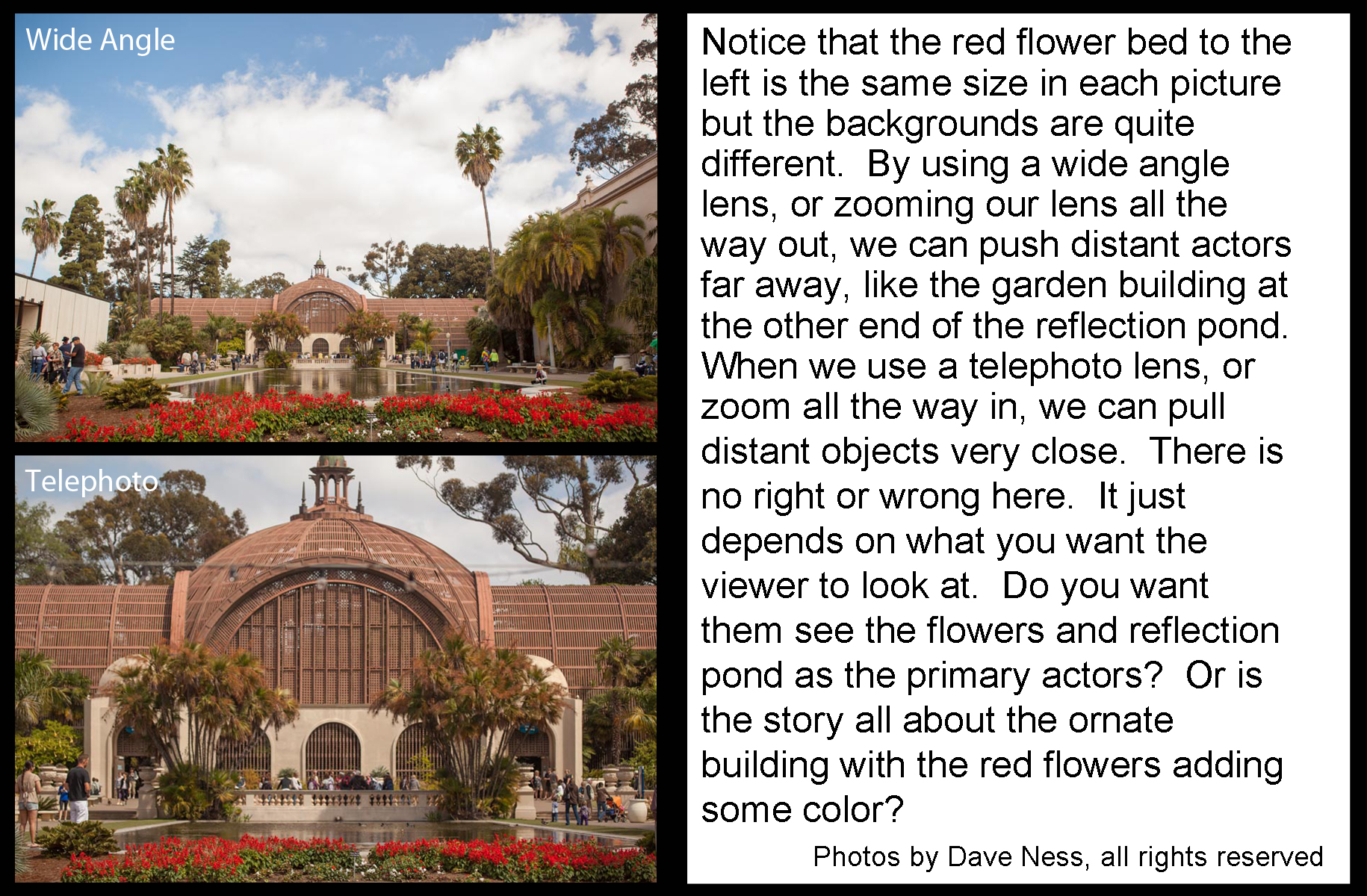 Moving the building closer and making it the story. 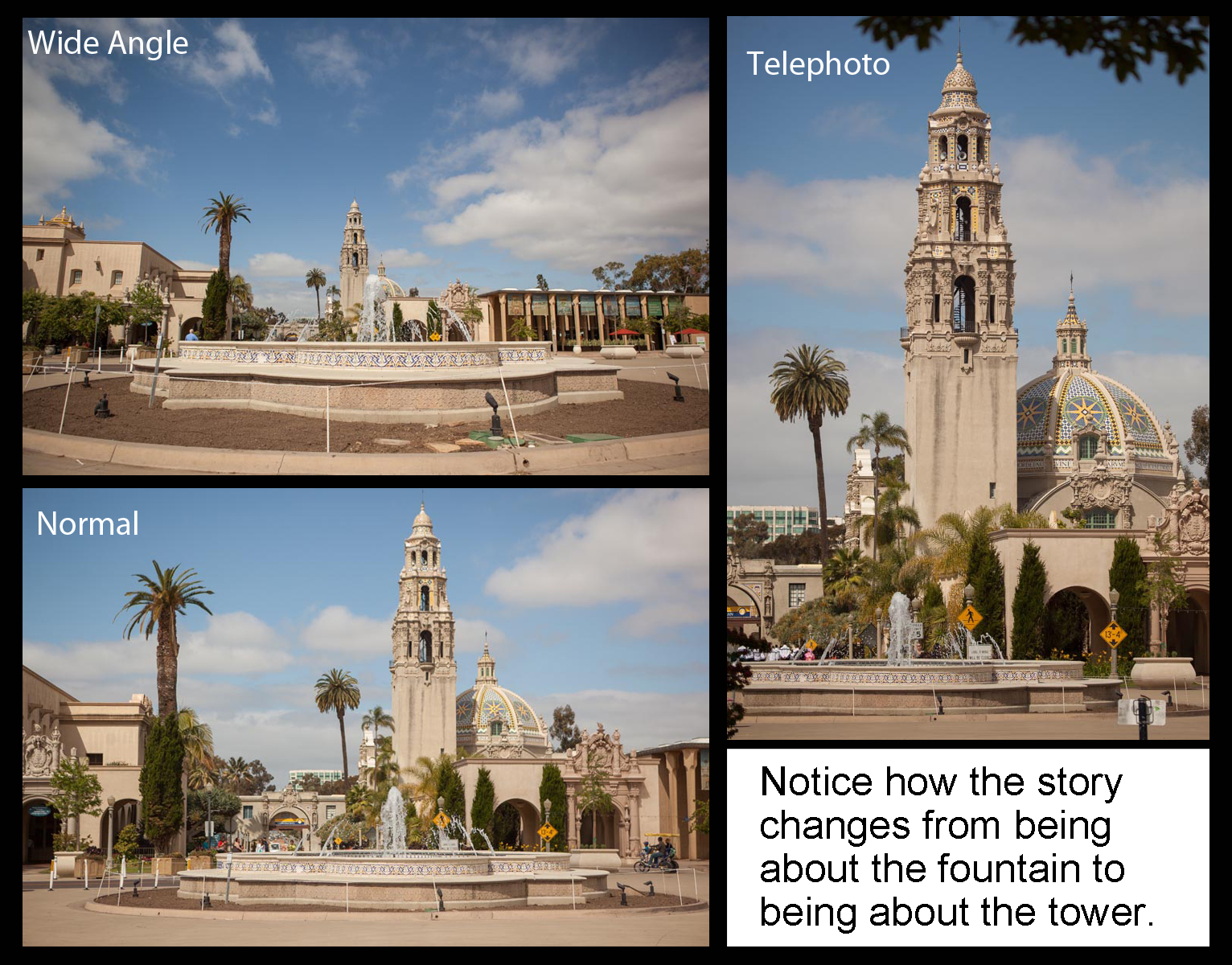 The story changes as you pull the tall tower closer.

So go ahead and give it a try.  Push some buildings and mountains around.  There’s no right or wrong, only what fits what you are trying to convey in your photo.

Don’t you wish you could rearrange the items in your scene before you take a picture? You can!

I call the items in an scene “Actors” and you can move your Actors by moving your camera.

When we take a picture we tend to use our “Mind’s Eye” to look at what is interesting to us. Go ahead and do that, but before you click the shutter, look at things that are not interesting to you. Is there a light pole sticking out of your friends head? How about an attention getting trash truck in the background? Maybe there is a big gap between Actors you want to feature together?

When you raise your camera, Actors close to the camera drop down in the image and distant Actors stay at about the same height. You’ll also see the ground close to you appear larger, filling up more of the bottom half of the image as you raise your camera and point it down. Conversely, when you lower your camera the Actors nearby, in the bottom of the scene, compress and take up less of the space in the picture and you typically see more sky.

These Seagulls sitting on the railing are interesting, but the background is cluttered and not interesting. By raising the camera, or standing on a chair or bench, we can point the camera down separating and exposing the background actors. Stepping to the side while pointing your camera at a desired nearby Actor  can dramatically move the background if the near and far Actors are separated by a good distance. You can also move two Actors at different distances closer together just by moving yourself a short distance to align them in one line of sight.

Here’s an example.  The boats are not grouped well and the white fuel tanks in the background are distracting. The layout of my “Actors” is shown on this simple drawing with the picture above coming from the camera position on the left: Can you imagine what the scene will look like from the new camera position?

And by moving 100 feet down the path to the camera position shown on the right above I captured this scene: This technique is easy to do, takes less than one minute and will give you much more interesting pics.

Just remember that ole’s chant
“Step to the Left, Step to the Right,
Stand Up, Sit Down … Get it Right!”.
Okay, maybe it’s a new chant…